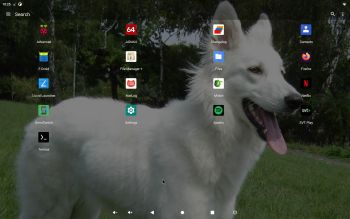 ABOUT RaspAnd 11 – Build 210309
RaspAnd 11 runs very well on a Raspberry Pi 4. I.e. the system is pretty responsive if you use a micro SD card of good quality. RaspAnd 11 has the following apps pre-installed: Netflix, Spotify, SVTPlay, Termux, Firefox, F-Droid, and Aida64. Unfortunately not Google Play Store, but F-Droid works as good replacement for it. You can also download APK files (Android packages) and install them. Normally without problems.

About Raspberry Pi  4
This build (RaspAnd 11 210309) works very well on the new Raspberry Pi 4. I used the latest model with 8GB RAM, but you can of course use the other models too.

Startup of RaspAnd 11 Build 210309
The first thing you will see on the screen is this boot animation.

MORE NEWS 210309 ABOUT RaspAnd 11
RaspAnd 11 can be installed to a Micro SD card (preferable a class 10 card) in Windows 10 using Rufus, Win32 Disk Imager or Etcher. You can alternatively (of course) use the dd-command in a Linux system. Unzip the downloaded file raspand-android-11-rpi4-netflix-spotify-bluetooth-1020mb-210309.zip. Then open a terminal and run the command dd if=raspand-android-11-rpi4-netflix-spotify-bluetooth-8600mb-210309.img of=/dev/sdX bs=4MiB
(Change X to b, d or…). 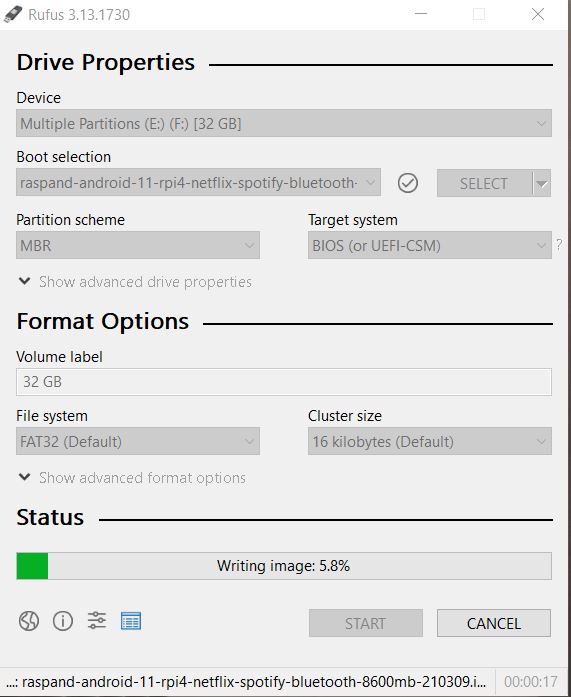 About Termux
Termux is an Android terminal emulator and Linux environment app that works directly with no rooting or setup required. A minimal base system is installed automatically – additional packages are available using the APT package manager. Watch a screenshot when I’m installing Nano.

Compatibility :: March 2021
Unfortunately not all systems made for Raspberry Pi 3 and 2 will run on the new Raspberry Pi 4 computer. They need to be upgraded with a new kernel. I therefore have to upgrade the systems I distribute. I.e. RaspEX, RaspEX with OpenCPN, exGENT, RaspEX BunsenLabs, RaspEX Kodi, RaspAnd Marshmallow, RaspAnd Nougat 7.1.2, RaspAnd Oreo 8.1, RaspAnd Pie, RaspAnd 10, RaspAnd 11 Build 210321, EXTON OpSuS Rpi, FedEX Rpi3 and RaspArch. I have until now (210211) only upgraded RaspAnd 11, RaspAnd 10, RaspEX, RaspEX Kodi, RaspArch, exGENT and RaspEX with OpenCPN. Read about the new Raspberry Pi 4.