NEWS 221202
I have uploaded a new version of RaspArch after I’ve discovered a better way to configure the system. I.e. I’ve replaced /boot/config.txt with this file. The new configuration makes the system automatically choose the best possible resolution for your monitor. Watch this screenshot when I’m using a 3440×1440 (Ultrawide) monitor.
NOTE: If you already have installed RaspArch Build 221127 you don’t have to reinstall. Just replace /boot/config.txt with the one I’ve provided – see above. Then reboot. You will probably notice a big difference.

Most important change in version 221127: Use Rufus 3.20 to install RaspArch to the SD card
This version can be installed in Windows using Rufus 3.20, Win32 Disk Imager or Etcher. Previous versions could only be installed when running a Linux system. Using Rufus or Win32 Disk Imager has one disadvantage though. Only about 2GB can be used as data storage no matter which card you use. The system is of 6GB and the system partition of 8GB. If you use a card of 128GB about 122GB will be unused. A few month ago a member on this site wrote about how to get rid of the 6GB limit after Rufus, Win32 Disk Imager or Etcher has been used:
– write the image with Rufus 3.21
– start up Ubuntu or another Linux system – you can also use a Linux Live CD/USB stick
– start GParted – screenshot before resizing
– screenshot during resizing
– resize the DATA (/dev/sdb2 ext4) partition – screenshot after resizing
– done!
This screenshot shows that RaspArch now has about 113GB free storage. NOTE (very important): You should do the resizing directly after you have transferred the image to your SD card. That is if you don’t think that 2GB (8GB – 6GB) is enough for new installations etc.

Writing the image using Rufus 3.21. See the screenshot below. 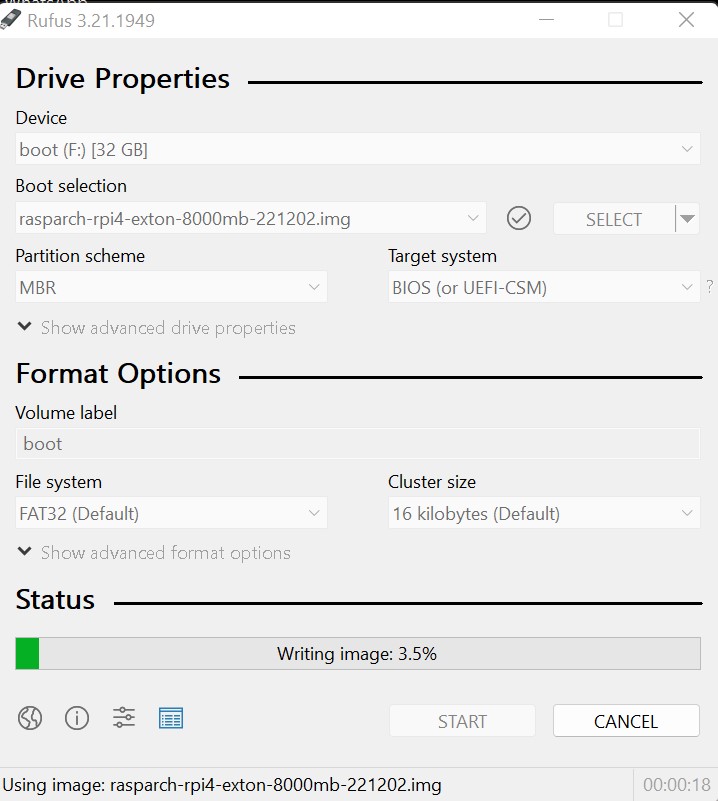 UPGRADE RaspArch
If you have downloaded and installed one of my previous versions of RaspArch before you can still use the Micro SD Card with RaspArch on the new Raspberry Pi 4 after a full upgrade of the system. Commands: pacman -Sy followed by pacman -Syu. Most important the old kernel will automatically be replaced by kernel 5.15.79-2-rpi-ARCH.
NOTE: After such an upgrade LightDM Display Manager will be unusable (for some unknown reason). Therefore you should uninstall LightDM and replace it with SLiM.
Commands: sudo pacman -R lightdm followed by sudo pacman -S slim.

NEWS in RaspArch Build 221127
A new kernel – 5.15.79-2-rpi-ARCH. All included packages have been updated to the latest version as of 221202. I’ve also replaced Yaourt with Yay – Yet Another Yogurt – An AUR Helper Written in Go. I came to know that Yaourt is dead. I.e. Yaourt is not being developed anymore. I have also installed PulseAudio. I’ve replaced the LightDM Display Manager with SLiM. Finally the sound works very well in RaspArch. Nice if you like YouTube. I’ve also replaced Wicd with NetworkManager. It works better. NOTE: To be able to install Yay I had to install a lot of development tools.

More about RaspArch
When you have installed RaspArch to your Micro SD Card you can use the system like any other Arch Linux system. I.e. install new programs etc. Arch motto is KISS (Keep It Simple Stupid). RaspArch uses kernel 5.15.79-2-rpi-ARCH and the LXDE Desktop environment.

Login and passwords
After the boot process is ready you will end up at SliM’s login page – see the screenshot below. Log in as the ordinary user archpi with password raspberry or as root with password root. While logged in as archpi you can use Sudo to become root. Example commands: sudo su and sudo pcmanfm. 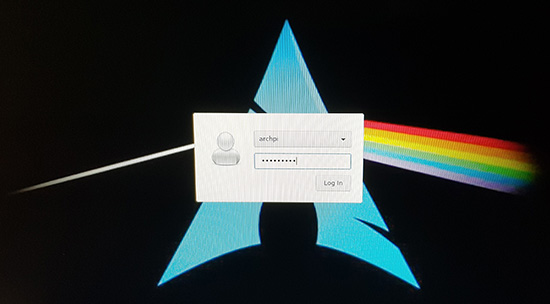 Program Management in Arch Linux
Arch Linux uses a proprietary system called Pacman. It is similar to that found in CRUX Linux. Read about Pacman.
You can also read all the documentation on Arch Linux. Seven commands are basically the only ones you need to use:
1) pacman -Sy (update the packages database)
2) pacman-key –refresh-keys
3) pacman -Sy archlinux-keyring
4) pacman -Syu (upgrading the whole system)
5) pacman -S MyUsefulProgram (the package installation command)
6) pacman -R UnnecessaryProgram (uninstall a package).
7) pacman -S –overwrite MyUsefulProgram (in case you get an error about “conflicting packages”)
8) pacman -Scc (clean pacman cache)
Very simple!
Note1: You can also use Yay – see below.

Using Yay – Yet Another Yogurt – An AUR Helper
If you want to install certain special packages you can/must install Yay. Study this tutorial about how to install and use Yay – Yet Another Yogurt – An AUR Helper Written in Go. Note: Yay is pre-installed in RaspArch Build 220216. If you want to install new packages through Yay you’ll have to run the command su archpi before yay -S MyNeededProgram. If you’re not logged in as the ordinary user archpi. (You can’t run Yay as root). Watch a screenshot when I’m installing SMPlayer using Yay.

Wireless connections
Just use NetworkManager, add your password and connect.

Installing/using Samba
A way to reach your Windows computers in your home network is to install Samba. Command: pacman -S samba gvfs gvfs-smb sshfs
Then start Samba with the command systemctl start smb.service nmb.service
After that you can connect to your Windows computers via PCManFM – watch this screenshot. (My Raspberry Pi 4 running RaspArch is connected to one of my computers in my home network). NOTE: Samba is already installed and configured in RaspArch Build 221127. Just run the command sudo systemctl enable smb.service nmb.service. You may have to reboot your Rpi before you can use Samba.

Sound in RaspArch
In Build 221127 I’ve installed alsa-utils, PulseAudio and Pavucontrol. The sound works alright now. From Arch Linux for Raspberry Pi Wiki I learned this. If you want/need sound in RaspArch you should follow the instruction below. Run the following command: amixer cset numid=3 X
Where X corresponds to:
0 for Auto
1 for Analog out
2 for HDMIAdd the following lines to /boot/config.txt
dtparam=audio=on
and
audio_pwm_mode=2 (if you use the 3.5mm analogue output)

BENEFITS of Arch Linux/RaspArch
“Cutting Edge”-software and speed. A member on this site recently wrote this about RaspArch: I’ve used Slackware, Debian, Gentoo, Ubuntu & Arch. I prefer Arch. Ubuntu is easier to install, Arch is easier to keep up to date. You do not go through big, painful, changes every year instead you just update, once in a while, make changes if instructed. Arch has most of the benefits of Gentoo without the pain of recompiling _everything_. When you do need to build a package in Arch its painless especially if you use one of the tools that support AUR (I like Yay). Arch avoids the politics of Debian and Ubuntu and delivers a great Linux distribution. RaspArch now brings these advantages to the Pi 2.