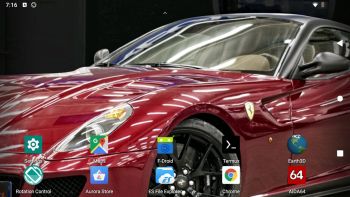 RaspAnd Pie 9 for Raspberry Pi 3 B and B+ :: Build 190903 :: with Google Chrome,YouTube, Aurora Store and F-Droid – Free and Open Source Android App Repository. NOTE: Aurora and F-Droid are replacements for Yalp Store and Aptoide App Manager. Yalp doesn’t work anymore. Aptoide works very well in RaspAnd Pie, but I had no room for it in this build. You can, however, easily install Aptoide yourself.

About Raspberry Pi 4
This build (RaspAnd Pie 190903) doesn’t work on the new Raspberry Pi 4. You can also not yet find another build (with Android) which works on the Raspberry Pi 4 computer.

About Aurora Store
Aurora Store is an alternate to Google’s Play Store, with an elegant design, using Aurora you can download apps, update existing apps, search for apps, get details about in-app trackers, spoof your location and much more. So Aurora Store works as a pretty good replacement for Google Play Store. I think.

About GetJar
The worlds biggest Open App Store for Android. If you can’t find the app you want on at Aurora or F-Droid you can always try with GetJar. Just download the APK file and install it! 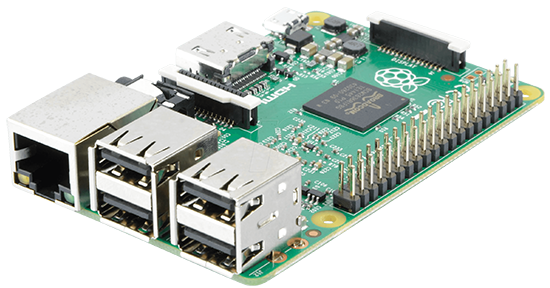 MORE NEWS 190903 ABOUT RaspAnd Pie 9
RaspAnd Pie 9 can be installed to a Micro SD card (preferable a class 10 card) in Windows 10 using Rufus, Win32 Disk Imager or Etcher. You can alternatively (of course) use the dd-command in a Linux system. Unzip the downloaded file raspand-pie-9.0-chrome-youtube-aurora-fdroid-bluetooth-369mb-190903.zip. Then open a terminal and run the command dd if=raspand-pie-9.0-chrome-youtube-aurora-fdroid-bluetooth-4000mb-190903.img of=/dev/sdX bs=4MiB
(Change X to b, d or…). 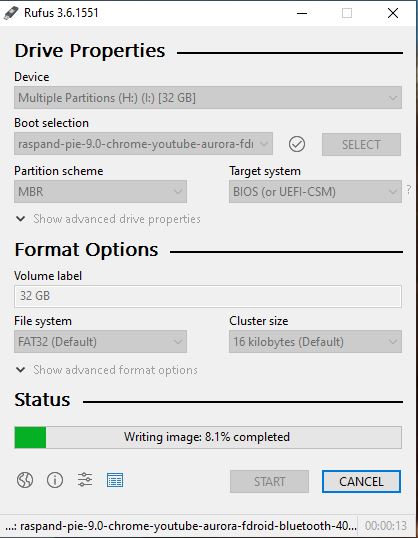 You shall see the boot animation below (moving) when RaspAnd Pie start up on your Raspberry Pi 3. If not something is wrong. Please try again and install RaspAnd the way I’ve described above. 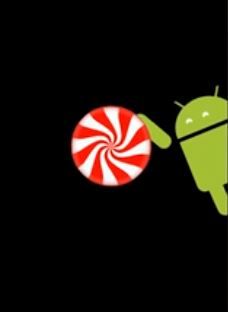 WiFi support
The newer versions of RaspAnd has excellent support for WiFi (on Raspberry Pi 3 Model B and Model B+). Previous problems with the WiFi connection are gone. I.e. the WiFi connection will automatically be re-established after every reboot.

Spotify
Spotify works very well in RaspAnd Pie. Just log in and play your favorite music! Install Spotify via Aptoide App Manager, Aurora Store or F-Droid. It can look like this.

NOTE/WARNING
PLEASE NOTE that you must be aware of the fact that the Raspberry Pi 3 Model B and Pi 3 Model B+ computer has its limitations and that Android Pie 9 is a very advanced Linux system. Having said that I must also say that the apps I have included in this Build (see above) work very well.

Do I need to update?
If you already have installed my old version of RaspAnd Pie from 190315 or 190429 you can just install Aurora Store and/or F-Droid. After that you will get a chance to update all included apps (and add many more).