Most important change in version 220216: Use Rufus 3.17 to install RaspArch to the SD card
This version can be installed in Windows using Rufus 3.17, Win32 Disk Imager or Etcher. Previous versions could only be installed when running a Linux system. Using Rufus or Win32 Disk Imager has one disadvantage though. Only about 300MB can be used as data storage no matter which card you use. The system is of 5GB and the system partition of 6GB. If you use a card of 128GB about 123GB will be unused. A few month ago a member on this site wrote about how to get rid of the 6GB limit after Rufus, Win32 Disk Imager or Etcher has been used:
– write the image with Rufus 3.17
– start up Ubuntu or another Linux system – you can also use a Linux Live CD/USB stick
– start GParted – screenshot before resizing
– screenshot during resizing
– resize the DATA (/dev/sdb2 ext4) partition – screenshot after resizing
– done!
This screenshot shows that RaspArch now has about 113GB free storage. NOTE (very important): You should do the resizing directly after you have transferred the image to your SD card. That is if you don’t think that 1GB (6GB – 5GB) is enough for new installations etc.

Writing the image using Rufus 3.17. See the screenshot below. 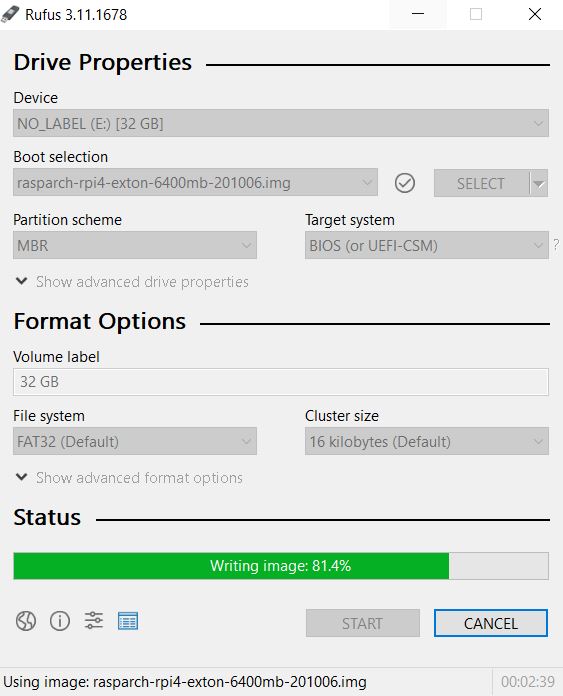 UPGRADE RaspArch
If you have downloaded and installed one of my previous versions of RaspArch before you can still use the Micro SD Card with RaspArch on the new Raspberry Pi 4 after a full upgrade of the system. Commands: pacman -Sy followed by pacman -Syu. Most important the old kernel will automatically be replaced by kernel 5.15.21-3-rpi-ARCH.

NEWS in RaspArch Build 220216
A new kernel – 5.15.21-3-rpi-ARCH. All included packages have been updated to the latest version as of 220216. I’ve also replaced Yaourt with Yay – Yet Another Yogurt – An AUR Helper Written in Go. I came to know that Yaourt is dead. I.e. Yaourt is not being developed anymore. I have also installed PulseAudio. Finally the sound works very well in RaspArch. Nice if you like YouTube. I’ve also replaced Wicd with NetworkManager. It works better. NOTE: To be able to install Yay I had to install a lot of development tools.