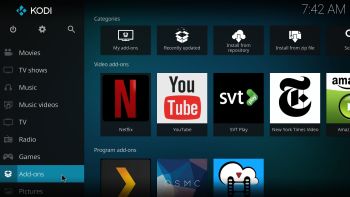 ABOUT RaspEX Kodi
RaspEX Kodi Build 190117 with LXDE/OSMC Desktops is made especially for the new Raspberry Pi 3 Model B+, but can of course also be used on a Raspberry Pi 3 Model B and a Raspberry Pi 2 Model B. OSMC is based on Debian and Kodi Media Center. In RaspEX Kodi I’ve added the LXDE Desktop with many useful applications such as Wicd and NetworkManager. Makes it easy to configure your wireless network. I’ve also upgraded OSMC to a BETA version (Kodi 18 RC5 Leia), which makes it possible to include useful addons such as Netflix, Plex and Amazon Video. Which I’ve done. Kodi 18 RC5 was released 190114. Study all included packages in RaspEX Kodi.

About OSMC (short for Open Source Media Center) and the difference between RaspEX Kodi and OSMC
OSMC is based on Debian and Kodi Media Center. It is an embedded, minimal, self updating Linux distributing which ships a Kodi front-end for a variety of devices. The project was founded by Sam Nazarko in 2014 and is maintained by a group of volunteers in their spare time. OSMC can be downloaded for free for all supported platforms on their official Download page. So OSMC has no real Linux Desktop. After the boot process and some configurations are ready you will end up directly in Kodi. Running RaspEX Kodi you will immediately end up at LightDM‘s login page – see below how it will look. From there you can log in to the LXDE Desktop as the ordinary user osmc or as root. Passwords: osmc/root. As user osmc you can alternatively log in directly to Kodi 18 RC5. However after the first boot you should chose to log in to the LXDE Desktop and use Wicd and/or NetworkManager for configuring your network connection. The big difference between OSMC and RaspEX Kodi is that Kodi 18 RC5 Leia is pre-installed in RaspEX Kodi together with some really useful addons (Netflix, Plex and Amazon Video). Those addons need Widevine to run. While you are logged in to the LXDE Desktop you can use Synaptic Package Manager to install all extra packages you may need. Since OSMC/RaspEX Kodi is based on Debian you’ll have about 30000 packages to chose between. 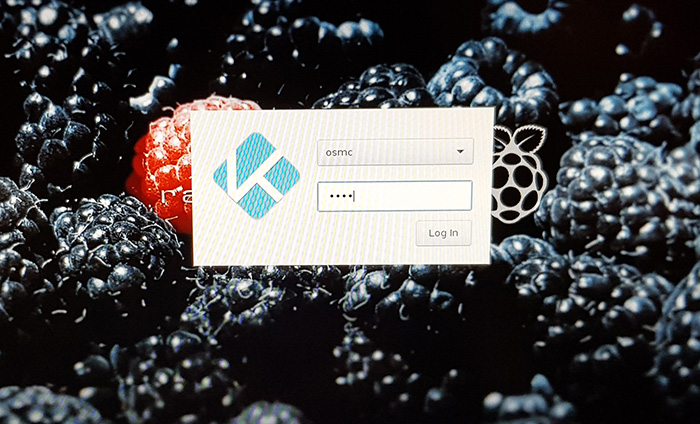 How do I install RaspEX Kodi in Windows?
Just like any other Raspberry Pi system. I.e.: Unpack the downloaded ZIP file (raspex-osmc-lxde-netflix-amazon-video-plex-kodi18-rc5-1530mb-190117.zip) and transfer the IMAGE file (raspex-osmc-lxde-netflix-amazon-video-plex-kodi18-rc5-4050mb-190117.img) to your Micro SD card of at least 8GB. For that you shall use Etcher in Windows. When running Etcher it will look like this. 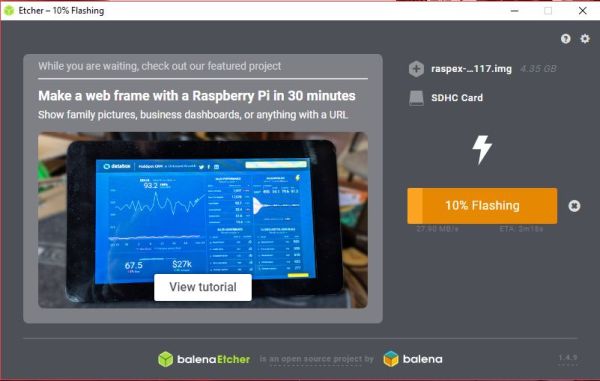 How do I install RaspEX Kodi in Linux?
You can of course also install RaspEX in any Linux system using the dd command. Just open up at terminal and run the following command (as root):
dd if=raspex-osmc-lxde-netflix-amazon-video-plex-kodi18-rc5-4050mb-190117.img of=/dev/sdX bs=1M
Note: Change /dev/sdX to for example /dev/sdc, /dev/sde or…
(Check it carefully before you run the above command so you won’t lose important data).

RaspEX Kodi performance
RaspEX Kodi is a very fast and responsive Rpi system. Much due to very low memory (RAM) usage. About 100 MB as this screenshot shows. I’ve said that RaspEX LXDE Build 181015 is very fast. RaspEX Kodi with OSMC Desktop is even faster especially if you use the new Raspberry Pi 3 Model B+ to run it. The video and sound quality is also very very good. Even while running RaspEX Kodi on big TV screens. I.e. you can really enjoy Netflix and YouTube running on your Rpi mini computer!

DOWNLOAD
This RaspEX build can’t be downloaded anymore. I have, however, made a replacement for Build 190117.
RaspEX Kodi Build 190124 is a replacement for RaspEX Kodi with OSMC, which was released 190117. Sam Nazarko (founder of OSMC) contacted me 190118 claiming that I was “violating” his rights to the trademark OSMC and the rules in GPLv2. I don’t think I did, but I’m also very tired. Therefore I made a new version of RaspEX Kodi without any traces of OSMC. I would say that my new version is as good as the old one. I.e. excellent video and sound performance both in Kodi and LXDE.