This version (161205) is my fourth build of RaspArch
The first version is from 150414. The second is from 151107. The third is from 160312 specially made for the new Raspberry Pi 3. This version (161205) and version 160312 of RaspArch can of course also run on the “old” Raspberry Pi 2. RaspArch is a “remaster” of Arch Linux ARM. The original compressed system is of 231 MB. After I have added the LXDE Desktop environment, PulseAudio, Firefox, Yaourt and Gimp the system increased to 700 MB. RaspArch is a “ready-to-go” ARM system. It must be installed on a Raspberry Pi 3 model B or Pi 2 computer.

UPGRADE RaspArch
If you have downloaded and installed my previous version of RaspArch from 160312 you can still use the Micro SD Card with RaspArch on the new Raspberry Pi 3 after a full upgrade of the system. Commands: pacman -Sy followed by pacman -Syu. Most important the old kernel will automatically be replaced by kernel 4.4.35-1-ARCH.

NEWS in RaspArch Build 161205
A new kernel – 4.4.35-1-ARCH. All included packages have been updated to the latest version as of 161205. I have added support for Yaourt – a Pacman Fronted. I have also installed PulseAudio. Finally the sound works alright in RaspArch. Nice if you like YouTube. Note: To be able to install Yaourt I had to install a lot of development tools.

More about RaspArch
When you have installed RaspArch to your Micro SD Card you can use the system like any other Arch Linux system. I.e. install new programs etc. Arch motto is KISS (Keep It Simple Stupid). RaspArch uses kernel 4.4.35-1-ARCH and the LXDE Desktop environment.

How do I install RaspArch?
Almost like any other Raspberry system. The installation has to take place in Linux though. (From hard drive or while running a live Linux system from a CD or a USB stick). Follow this instruction. The whole thing has to be done exactly like this.
1. Unpack the downloaded file rasparch-exton-558mb-160312.tar.gz with tar -zxvf rasparch-exton-700mb-161205.tar.gz. You will get the folder rasparch-exton. Run the following commands as root. (Do not use Sudo).
2. Start fdisk to partition the SD card:
fdisk /dev/sdd (example; be sure to check which name your SD-card got. I.e. /dev/sdd, /dev/sdc, /dev/sdb or…)
3. At the fdisk prompt, delete old partitions and create a new one:
a. Type o. This will clear out any partitions on the drive.
b. Type p to list partitions. There should be no partitions left.
c. Type n, then p for primary, 1 for the first partition on the drive, press ENTER to accept the default first sector, then type +100M for the last sector.
d. Type t, then c to set the first partition to type W95 FAT32 (LBA).
e. Type n, then p for primary, 2 for the second partition on the drive, and then press ENTER twice to accept the default first and last sector.
f. Write the partition table and exit by typing w.
g. Create and mount the FAT filesystem:
mkfs.vfat /dev/sdd1
mkdir boot
mount /dev/sdd1 boot
4. Create and mount the ext4 filesystem:
mkfs.ext4 /dev/sdd2
mkdir root
mount /dev/sdd2 root
5. cp -av rasparch-exton/* root
6. sync
7. Move boot files to the first partition:
mv root/boot/* boot
8. Unmount the two partitions:
umount boot root
9. Insert the SD card into the Raspberry Pi 3 or Pi 2, connect ethernet (for Pi 2), and apply 5V power.
10. You will after a few seconds end up in console mode. Log in as root. The default root password is root. Enter X/LXDE with the command startx
The above instruction (slightly modified) is from the Arch Linux ARM site. 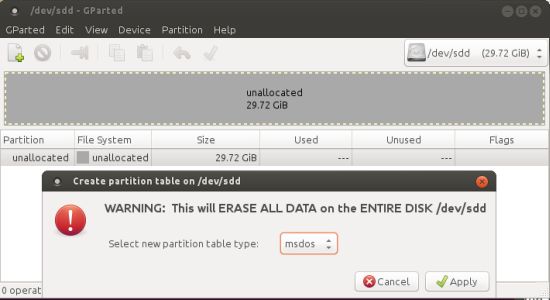 Sound in RaspArch
In Build 161205 I’ve installed alsa-utils, PulseAudio and Pavucontrol. The sound works alright now. From Arch Linux for Raspberry Pi Wiki I learned this. If you want/need sound in RaspArch you should follow the instruction below. 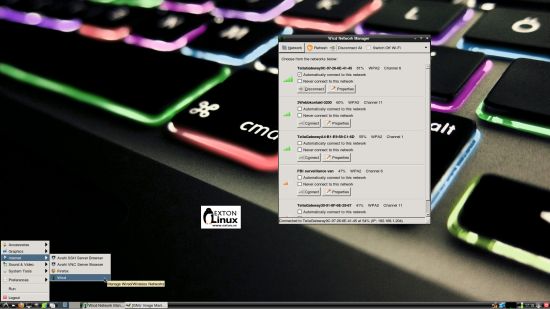 DOWNLOAD
This version (161205) has been replaced by version 171102, which can be installed in Windows using Win32 Disk Imager.