NEWS 160426 about RaspEX for Raspberry Pi 3 and Pi 2
In RaspEX Build 160421, based on Ubuntu 16.04, I could not include Kodi (XBMC) Media Center (a free and open-source media player software application developed by the XBMC Foundation) without removing LXDE and many other programs. Now I’ve found a solution. I was able to install Kodi 16.0 alongside Fluxbox. A Desktop environment besides Kodi is needed so you can configure your wireless network and other stuff. Study all installed packages in Build 160426.
See a screenshot when my wireless network is configured
See a screenshot when Kodi is running

NEWS 160426 ABOUT RaspEX
RaspEX Build 160426 is a Linux ARM system for Raspberry Pi 3 and Pi 2. It is based on Debian Jessie (Debian 8), Ubuntu (Ubuntu 16.04, released 160421) and Linaro (Open Source software for ARM SoCs). In this new version (160426) I’ve replaced LXDE Desktop environment with Fluxbox, Wicd Network Manager with Wifi-Radar and Firefox with Qupzilla. The replacements were necessary to make it possible to install Kodi Media Center 16.0.  NOTE: Kodi (XBMC) Media Center is also installed in Build 160402 based on Ubuntu 15.10.

More about RaspEX Build 160426
RaspEX Build 160426 uses Fluxbox as Desktop environment. (Fluxbox is very light on resources and easy to handle but yet full of features to make an easy, and extremely fast, desktop experience). Furthermore Kodi (XBMC) Media Center (a free and open-source media player software application developed by the XBMC Foundation). Many other useful programs are pre-installed. Quzilla is used as Web Browser and Wifi-Radar as Network Manager. You can use Apt-get to install any extra packages you may need. RaspEX uses Ubuntu’s software repositories so you can install thousands of extra packages if you want. Please be aware of that some new installations (for example of Firefox) will break the Kodi installation).

NOTE: Kodi Media Center is also installed in Build 160402 based on Ubuntu 15.10. In Build 160402 you can install all new packages you want without the risk of breaking Kodi.

Why shall I use RaspEX?
Eight Operating Systems are recommended by Raspberrypi.org. Among them Noobs, Raspbian (Debian Jessie) and Snappy Ubuntu Core. RaspEX is faster (“fast as lightning”), more useful and more fun to use. (In my opinion). One member at this site thought that running RaspEX (for Raspberry Pi 2) was like running Raspberry Pi on “steroids“. RaspEX Build 160426, 160421 and 160402 are (of course) even faster, especially if you run the systems on a Raspberry Pi 3 computer.

How do I use RaspEX?
When you start up your Raspberry Mini computer with RaspEX you will (after a few seconds) end up in X and Fluxbox as the ordinary user raspex. The password for raspex is raspex. When logged in as raspex you can use Sudo to become root. Example: sudo su and sudo emelfm2. The password for root (superuser) is root. You can log out from Fluxbox (Exit in Fluxbox’s Menu) and log in again as root (if you want). This is how it looks at SLiM‘s login page. 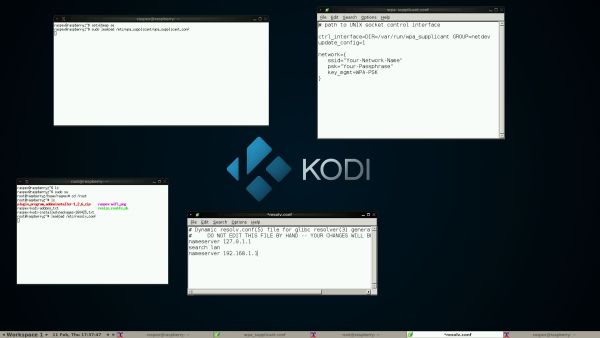 
Compatibility :: October 2016
Unfortunately not all systems made for Raspberry Pi 2 will run on the new Pi 3. They need to be upgraded with a new kernel. I therefore have to upgrade the systems I distribute. I.e. RaspEX with LXDE, RaspEX with Kodi, RaspEX with OpenCPN, RaspAnd Marshmallow, RaspAnd Lollipop and RaspArch. I have now (161019) upgraded all systems. Read about the new Raspberry Pi 3…