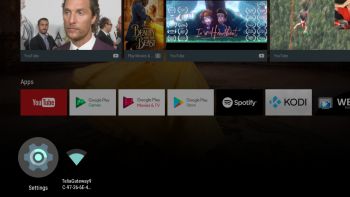 NEWS 171019 about RaspAnd Nougat 7.1.2 for Raspberry Pi 3
RaspAnd Nougat 7.1.2 Build 170805 can be installed in Windows using Win32 Disk Imager. This method has one disadvantage. Only about about 5GB can be used as data storage no matter which card you use. I have therefore today uploaded a new version, which can be (must be) installed using a Linux system. The new system from 171019 is basically the same system as the RaspAnd system from 170805. I have only added AIDA 1.47 and replaced Google Chrome with Firefox 56.0. Kodi has been upgraded from version 17.3 to version 18.0-ALPHA1. Now say, for example, that you use Micro SD card (preferable a class 10 card) of 64GB about 56GB can be used as data storage. This is of course a big advantage.

NEWS 170805 ABOUT RaspAnd Nougat 7.1.2 with Google Play Store working
I have finally managed to make a version of RaspAnd Nougat 7.1.2 (for Raspberry Pi 3), which has GAPPS installed and Google Play Store working. This version of RaspAnd can be installed in Windows using Win32 Disk Imager. The video performance is generally much better than in previous versions and the screen flickering is (almost) gone. 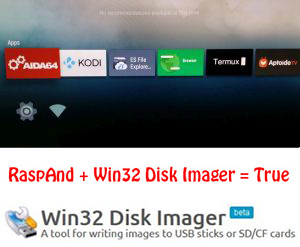 I have finally managed to make a version of RaspAnd Nougat 7.1.2 with GAPPS, which can be installed to a Micro SD card (preferable a class 10 card) in Windows 10 using Win32 Disk Imager. You can alternatively (of course) use the dd-command in a Linux system. Unzip the downloaded file raspand-nougat-7.1.2-gapps-aptoide-tv-kodi-chrome-681mb-170805.zip. Then open a terminal and run the command dd if=raspand-nougat-7.1.2-gapps-aptoide-tv-kodi-chrome-7400mb-170805.img of=/dev/sdX bs=1M
(Change X to b, d or…).

MORE ABOUT RaspAnd
RaspAnd Nougat 7.1.2 Build 170805 is an Android 7.1.2 Nougat system which can run on Raspberry Pi 3. I have included the following apps:
1) GAPPS (Google Play Services with Google Play Store)
2) Kodi 17.3 (latest version which “allows users to play and view most videos, music, podcasts, and other digital media files from local and network storage media and the Internet”. YouTube is enabled and working very well!)
3) Spotify TV 1.4.0 (working very very well)
4) Google Play Games 5.2.25 (needed for Clash of Clans to run)
5) Clash of Clans is not included, but you can install it through Aptoide TV
6) Gmail 7.4.23
8) Aptoide TV 3.2.3 (for installing new apps which can’t be found on Google Play Store – many many apps can be installed!)
9) ES File Explorer 4.1.6.7.4 working very well
10) Google Chrome 59.0.3071 (latest version – working very well)
11) YouTube 1.3.11 with almost perfect video quality. Please don’t update YouTube to version 2.00.18 even though Google Play Store wants you to do it. If you do you will loose video quality. If you do it by accident just uninstall the update. (I.e. go back to the “Factory version”).

IMPORTANT NOTE ABOUT GOOGLE PLAY STORE: You may have to reboot your Rpi3 a couple of times before you can use (start) Google Play Store.

Different boot parameters in boot/config.txt
As you can see there is a file called config.txt in the folder boot. Check out this overview explaining the different parameters in config.txt. Some changes to config.txt could (possibly) help if you have screen problems (which I don’t think you will have when running RaspAnd Nougat Build 170805).

Startup of RaspAnd Nougat
The first thing you will see on the screen is the Nougat Boot Animation. If you do not see this colorful ring you haven’t installed RaspAnd correctly on the SD card. Try again and do EXACTLY as I write above. After several minutes (the first time you startup RaspAnd) you will see the first screen (i.e. the Desktop). The first thing you should do is to enable Wifi and connect to your Network. For Aptoide TV to work properly you also have to allow downloads from unknown sources. Note: You must also uncheck Verify apps. Then go to Settings >> Apps and try out some of the pre-installed apps or click on the icons shown on the Desktop. IMPORTANT: For Google Play Store to run you’ll first have to start the Gmail app and set up your Gmail account. Then reboot. After that you can start Google Play Store and install new apps. Aptoide TV can of course also be used to install many new apps. Preferably apps you can’t find on Google Play Store, for example Clash of Clans and Google Drive. NOTE: Google Play Services also works very well (so you can install new GAPPS using Google Play Store or Aptoide TV).

Gmail and Google Play Store
As I say above you’ll have to sign in to your Gmail account before you can use Google Play Store. So the first thing to do is to go to Settings >> Apps >> Gmail. When you start Gmail an error message will pop up – screenshot. Just ignore the message (close it) and go on to fill in your credentials – screenshot. When you are ready reboot your Raspberry Pi. After that you can enjoy Google Play Store without problems!

Netflix/HBO and other video/movie apps
Netflix 4.16.1 build200147 can be installed via Aptoide TV. You can log in to your account and start to play any movie with very good video and sound quality. Unfortunately Netflix will will crash after about 30 seconds. Or the movie playing will stop or get distorted colors. Nothing to do about it right now. As regards HBO version 2.1.3 you can install it and log in, but you can’t play any movie. Something is missing. (I don’t know what). Other video apps (for example SVT Play and TV4 Play) work without problems in RaspAnd Nougat Build 170805. SVT Play works especially good. Almost perfect video quality!
Screenshot – Netflix installation
Screenshot – Netflix running
Screenshot – HBO installation
Screenshot – HBO running

Screen rotation
Use Rotation Control Pro to set the screen to always be in Landscape mode. Maybe you’ll have to change this to suite your needs depending on which app you are running. Note: Normally you don’t need to use this app. That’s why it’s not included in RaspAnd Build 170805.

NOTE/WARNING – 1
Running Android Nougat on a Raspberry Pi 3 can sometimes be perceived as a bit sluggish. If you find it so, I recommend that you restart the system a couple of times, then everything will run faster! I.e. not really fast, but faster.

NOTE/WARNING – 2
You cannot use Raspberry Pi’s official 7 ” touchscreen monitor. RaspEX can use the touchscreen, but not RaspAnd. It’s a kernel matter.

KNOWN ISSUES
1. The screen can flicker sometimes on certain monitors. Fix: Click on the screen or wait a moment. That can happen the first time you start up RaspAnd and after every reboot.
2. IMPORTANT: For Google Play Store to run you’ll first have to start the Gmail app and set up your Gmail account. Then reboot. After that you can start Google Play Store and install new apps.
3. Not all apps will run in RaspAnd Nougat. You can for example run the popular (?) Clash of Clans very well (can be installed with Aptoide TV), but not Angry Birds. Many many apps will run without problems though.
4. You may have to reconnect to your Wifi Network after every reboot of RaspAnd. Sort of a “bug”.

NOTE/WARNING – 3
You shall not buy RaspAnd 7.1.2 if you expect that everything will work flawlessly. I.e. you must be aware of the fact that the Raspberry Pi 3 computer has its limitations and that Android 7.1.2 is a very advanced Linux system. Having said that I must also say that the apps I have included in this Build (see above) work very well most of the time.  Most important change: Google Play Store works very well. So does YouTube! Almost perfect video quality. See this screenshot.

This RaspAnd build has been replaced by Build 171215