NEWS 150527
I have compiled yet another Android 5.1 Lollipop system which can run on Raspberry Pi 2. I call “my” new system RaspAnd build 2. My first version of RaspAnd is from 150405. The following useful apps are pre-installed in build 2 of 150527: Aptoide App Manager (to be used instead of Google Play Store), Terminal Emulator, WinZip, FileManager, Rotation Control Lite, WPS Office and Offline Maps. Those apps were not included in build 1 from 150405.

How do I install RaspAnd?
Almost like any other Raspberry system. The installation has to take place in Linux though. (From hard drive or while running a live Linux system from cd or a USB stick). Follow this instruction. The whole thing has to be done exactly like this.
1. Unpack the downloaded Zip-file (raspand-android-lollipop-5.1-aptoide-247mb-150527.zip). You will get the folder raspand-android-lollipop-5.1-aptoide-247mb-150527 with the folder boot and the system file system.img
2. Create four partitions of/on your Micro SD Card with Fdisk or GParted.
a) Part 1 for BOOT of 512 MB ; format as fat32 ; flag as boot
b) Part 2 for /system of 512 MB; any filesystem
c) Part 3 for /cache of 512 MB ; format as ext4
d) Part 4 for /data; size the remain; format as ext4
When you are done with partitioning it shall look like this. 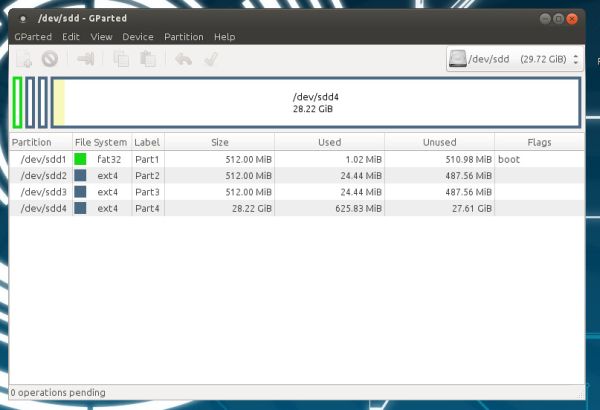 3. Now open up a terminal as root and run this command (make sure which name your SD card was given when you inserted it (/dev/sdb2 or /dev/sdc2 or as in the example here /dev/sdd2):
dd if=system.img of=/dev/sdd2 bs=1M
(Note: When you run the above command you’ll have to stand in the folder raspand-android-lollipop-5.1-aptoide-247mb-150527)
4. Then just copy every file in raspex-android-x86-lollipop-5.1-aptoide-150527/boot (8 files) to /dev/sdd1. If not mounted already you can mount it with mkdir /mnt/sdd1 followed by mount /dev/sdd1 /mnt/sdd1

Note: You shall not do anything with /dev/sdd3 and /dev/sdd4. I.e: Do not create folder /cache or /data.